A look back at Hozier history for February 19 to 25.

February 25, 2012: Hozier, Alex Ryan, and many of their musical associates played together in Trinity Orchestra. The orchestra, with Hozier amongst the vocalists, performed Arcade Fire and Pink Floyd at St. Leonard’s in Shoreditch, London. 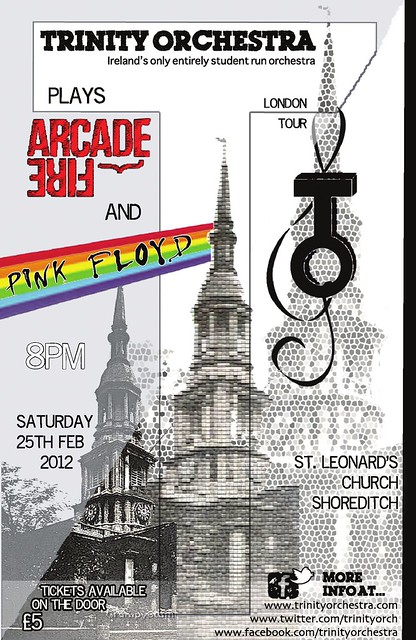 February 23, 2013: Hozier supported Rae Morris at the Unitarian Church in Dublin (where he would later launch his Take Me To Church EP in September of that year.)

Remarkably, here’s a full video of Hozier performing From Eden, solo, at that very show on February 23, 2013. (And it is fabulous!)

February 21, 2014: Hozier was in Dublin preparing for his first trip to America. His signing to Columbia was no secret in the industry, but got a bump in the media when several outlets picked up this piece from Artist Direct announcing that he’d been signed. About the Take Me To Church video:

It’s very current and topical, visually speaking, and the music is so powerful and arresting. You will be moved.

Are you excited about Hozier? WE ARE!

February 24, 2014: Hozier announces that his London show on 26 March is sold out and releases his appearance schedule for New York, Los Angeles, Hollywood and the Communion Music showcase at the upcoming SXSW Music Festival in Austin, Texas.

The lineup for that Communion Music showcase was impressive. Interestingly, one year later in February 2015,  Asgeir would be opening for Hozier on his North American Tour, and Sam Smith’s Stay With Me would win over Take Me To Church for Song of the Year at the 2015 Grammy Awards.

February 20, 2015: Hozier played the legendary First Avenue in Minneapolis. This Venue was where several of the songs from Prince’s soundtrack and movie Purple Rain were recorded.

As a tribute, Hozier played a cover of Morris Day and The Time’s Jungle Love from the Purple Rain soundtrack.

Jungle Love was still on Hozier’s mind in March when he said it was one of his favourite songs to perform live. (He later reprised the song at the Coachella Festival with Este Haim in April, for the second and final live performance.)

In this fantastic interview from First Avenue, Hozier said,

If there was an anthem for the tour, it would probably be Jungle Love.

February 21, 2015: Craving some dog therapy, Hozier and the gang received a visit from some pups at the venue in Milwaukee.

They were requested by Hozier, the band members, and crew since they all miss their pups back home and wanted to get a little love time before the show.

Read the whole story about how Hozier gave his support to MADACC, the animal welfare group who brought the dogs to play.

Thanks to the people at MADACC in Milwaukee for introducing us to some of these absolute champs. Lynus here went up for adoption yesterday.

So some rescue puppies visited us in the venue yesterday! #puppylove #hozier @madacc #puppy #puppies #cute

Here’s a great interview from soundcheck in Milwaukee where Hozier talks about guitars, Screamin’ Jay Hawkins and the dogs that came to visit.

Here’s the original clip of Morris Day and the Time’s very funky Jungle Love from the movie Purple Rain at First Avenue.